Few phrases have been more abused in marketing and really business in general than “win win.”

As the dictionary says (and yes, “win win” is now in the dictionary) “of or denoting a situation in which each party benefits in some way.”

That’s not to say that both parties benefit equally. Rather, they both get something. However, one thing to keep in mind with a “win win” – if one party continually feels like they’re getting less than the other, they might not consider it a “win win.” They might think of it as a “loss.”

During the pandemic and indeed, the digital revolution, there are more opportunities for a “win win” than were previously available. 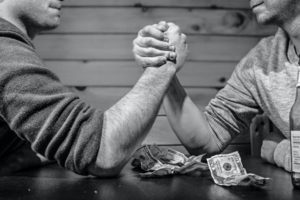 A virtual event can be a great way to connect to new customers while retaining existing ones. However, you want to make sure that a “virtual event” is just that – an event. It should be the kind of thing that people are going to want to come out to.

We’re not saying that it has to be a rock concert, comedy show, or anything like that. Rather, it should be something that has wide appeal for the kinds of customers that you’re interested in.

If yours is a highly competitive industry, you might be (rightly) be reticent to hold a virtual event with those that you tend to compete against.

However, consider doing so with people outside of your industry who are competing for the same customer base. 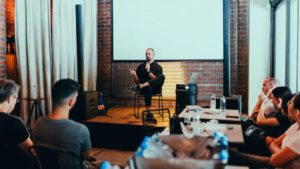 This article goes into ways that “financial advisors” can improve their digital marketing, but there was a wonderful bit of advice about virtual events buried in it.

So, a Managing Director of Applied Insights at Hartford Funds suggested: “Gathering a group of longevity experts in your community and ask them to speak on a panel, which could easily translate into a virtual event, if appropriate.”

The article goes on to say how these could all be people who may be “assisted living facility directors, elder law attorneys, certified aging-in-place specialists,” and so forth.

Now, financial advisors would probably be fine sharing a “virtual event” with each of those people. They have the same customer base, yet they aren’t competing against each other in any real way.

Connecting to Your Customers

There’s probably a similar version of this for your company. Who in your area, that you know, has the same customer base as you yet you aren’t in competition with?

Pizza, soft drinks, video game companies, and more have deals with professional sports leagues. There’s something that you can do, no matter how seemingly “small,” to help your business.

This is just one way to improve your marketing as well as your business. There are many, many more. To hold a remote marketing consulting in Los Angeles session with Danny, call (213) 457-3250.