“We’re trying to think creatively about our marketing, but we just can’t think of anything new.”

Is that something that you find yourself saying every now and then at your company?

It’s easy to “fall into a rut.” Something’s been working well for you for a while, then, it stops working (or even just slows). Then, it can feel like you need to do something to “jump-start” it again.

That said, there are plenty of ways to break out of a rut. For many of us on the Danny Star Contribution Team, when we feel that we’re a bit creatively tapped, we look at what other people are doing with marketing.

However, often, crucially, we don’t look at what our competitors are doing in marketing. (That’s important to do, but it’s not always the best way to be inspired.)

That can really get you “thinking outside of the box.” This is true for many reasons, not the least of which is that you are, quite literally, looking at something outside of “the box” of your industry.

That led us to this recent article: “Marketing for Bigfoot Film Shot in North Bend Aims to Support Struggling Local Movie Theaters.” 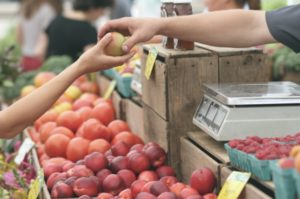 That’s what the executive product of Hunting Bigfoot said about the film’s marketing. Instead of releasing the movie in New York and LA, they’re using a “regional approach.” So, they’re opening the movie in Washington state. They aren’t just doing that because it’s the hometown, nostalgia, or anything of that nature.

Instead, their selling point to the theater is that they’ll “offer a better split than the major studios generally offer” and they won’t release the movie “in a digital sphere for 60 days.”

Indeed, the article goes on to say that “the local marketing tactics are old-school and grassroots, favoring posters to billboards. The filmmakers are partnering with chambers of commerce in screening cities to get local businesses and restaurants involved in marketing the film, since people often grab a bite before or after they see a movie.”

You might have read to this part and thought: “OK, but what does this have to do with my business, which does not involve a movie about a mythological creature?”

There’s something in what they’ve done that you can utilize.

You can connect to local businesses in your region (if not your industry) for partnerships that are advantageous to all involved. Additionally, you can certainly make your entire focus local. That way, you’ll be able to connect to more of the customers in your area.

For help with that or anything else related to growing your business, you should reach out to Danny Star. Schedule a marketing consulting in Los Angeles session with him at (213) 457-3250.